By Dominique Jando and Christian Hamel

Ursula Böttcher (1927-2010) was one of the most celebrated female animal trainers in the second half of the twentieth century. The diminutive German artist (she was 1,57 m. tall—or 5,1 feet) with the predestined name (Ursula comes from ursus, which means bear in Latin) stroke an amazing figure near the huge polar bears she eventually chose to present, and which made her a circus star all over Europe and in the United States.

She was born Ursula Blütchen in Dresden, Germany, on June 6, 1927, in a working class family. “Uschi,” as her friends called her, didn’t “run away and join the circus” in the adventurous manner typically described in cheap novels: She took a job as an usher and cleaning woman with Circus Busch, which was visiting Dresden in 1952. She was twenty-five, living right after WWII in a city that laid in ruins in Soviet-controlled East Germany; her brother had been killed on the Russian Front, and Ursula desperately needed to make a living by herself.

At Circus Busch, she met and fell in love with Erich Böttcher, assistant to the elephant trainer, Epi Vidane. Ursula liked her new life; she stayed with the circus and married Böttcher in 1955. She had also caught the circus bug, and began to take an interest in animal training. Meanwhile, Böttcher became the assistant of the famous Dutch wild animal trainer Jean Michon, before taking over a group of brown bears that he went on to present at Circus Barley in 1955.

There, the Dutch trainer Gaston Bosman, who was also performing in the show, taught Ursula to present his small group of three lions, with which she eventually made her performing debut at Circus Barley on July 19, 1955, in her home city of Dresden. She was pregnant then: At the end of the season, she became the proud mother of a daughter, Maria Angelika.

Meanwhile, the new German Democratic Republic had nationalized most of its surviving circuses into a central organization, and their performers had become employees of the State. Erich Böttcher was sent with his brown bears to Circus Sarani, one of the few private circuses left, which was owned by Ernst Probst. Ursula’s budding career as a lion trainer had come to a halt.

Nonetheless, she was helping her husband with his six bears, and in 1956, the Böttchers were offered another contract at Circus Busch, on the condition this time that the couple change roles: Ursula would present the bears, and Erich would assist her. Thus she resumed career as an animal trainer; in 1959, Ursula was given to present a new group of mixed animals: two leopards, three brown bears, and two polar bears—her first polar bears.

In 1960, Ursula Böttcher, now a respected artist on her own, got her first contract out of Germany, with the Bulgarian Circus Globus. It was still Eastern Europe, though. The following year, she returned to Circus Barley, now called Olympia, to take over a group of six lionesses, and after that a group of eight polar bears purchased from the Swedish circus Trolle Rhodin, which became her first polar bear act.

“Alaska” And Other Polar Bears 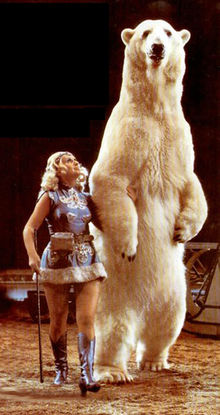 In 1964, Ursula was given another group of seven polar bears and one brown bear, trained by Wolfgang Mantag: This last group would serve as the foundation for the act that was to make her famous. It already included Alaska, the white giant that became her favorite, and “kissed” her at the end of their act. Two more polar bears were added later, and when Charly, the veteran brown bear, died in 1967, he was replaced by another polar bear, bringing homogeneity the group that now totaled ten animals.

From 1964 to 1970, Ursula went to work with this act to Circus Aeros, then East Germany’s premier circus. She had divorced Erich Böttcher, and had a new assistant, Manfred Horn (1939-1990), who would stay with her until his death, in 1990, from an attack by a Kodiak bear. Ursula Böttcher also went to perform abroad with Aeros in Romania, Hungary, and even a few cities in USSR.

She spent the winter of 1970-1971 at the Fövárosi Nagycirkusz in Budapest, and then was offered her first engagement out of the Eastern bloc, with Circus Boltini in Holland for the 1971 season. She returned to Budapest for the winter of 1971-1972, and was contracted for two seasons (1972 and 1973) by Cirque Jean Richard, then France’s premier circus, also considered as one of Europe’s best venues for a circus artist, especially an animal trainer; Ursula would keep fond memories of her two French seasons.

The 1974 season saw her at Circo Price in Spain. Then Ursula and Manfred packed their equipment and prepared their bears for a long trip: In November, they flew to the United States, where Irvin Feld had signed them to star in The Greatest Show On Earth, Ringling Bros. and Barnum & Bailey Circus.

American Years And Back To Europe

Ursula Böttcher spent six years in the United States: She was featured in Ringling’s Blue Unit in 1976 and 1977, spent the two following years at the Felds’ short-lived amusement park, Circus World, in Orlando, Florida, and then returned to the Blue Unit for the 1980 and 1981 seasons. She was a sensation in America, where an act such as hers had not been seen since the 1950s, when The Greatest Show On Earth still performed under the big top, and Albert Rix presented his spectacular mixed bear act.

Back to Europe, Ursula continued to work alternately in Eastern and in Western Europe, with contracts at Circus Busch, Circus Kronebau in Munich, and Circus Berolina. In December 1983, she appeared at the International Circus Festival of Monte-Carlo, where she was awarded the Nice-Matin prize. She then spent the 1984 season at Circus Knie in Switzerland, after what she flew to Japan, where she participated in an official tour of the GDR State Circus. The GDR also immortalized Ursula Böttcher in a postage stamp, part a series of four stamps celebrating the circus. 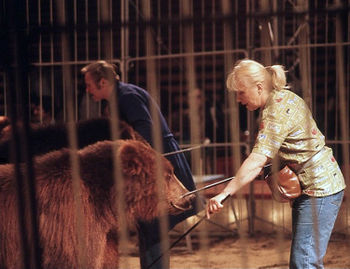 Ursula and Manfred Horn with the Kodiaks

After an engagement at Liana Orfei’s Golden Circus in Italy, and another at Munich’s Circus Kronebau in the winter of 1985-1986, Ursula was featured in the grand opening show of the new Friedrichstadtpalast in Berlin—a new version of prewar-Germany’s glorious “varieté” theaters, rebuilt on the place where the old Cirkus Albert Schumann had once stood. There, she began renewing her group, some animals having reached the age of retirement. She also acquired and began to train a group of four young Kodak bears—dangerous and powerful animals with a reputation of being impossible to train.

In June 1989, she presented in the same cage an extended group of fourteen polar bears and four Kodiaks, her largest group ever. That same year, Alaska, the white giant and Ursula’s favorite, passed away at the age of twenty-six. Other veterans were retired. The following year, Ursula Böttcher presented her group shrunk back to ten polar bears, while Manfred Horn presented the Kodiaks. The dangerous Kodiaks were now grown up and were becoming increasingly difficult; they often refused to work. Yet Manfred didn’t give up. On September 21, 1990, during a rehearsal in Minden, Germany, he was attacked by one of them, Nemo. Ursula and the equestrian and acrobat Dany Cesar came to Manfred’s rescue, but he was badly injured; he died one month later, on October 23.

Ursula continued to work, alone. She returned to Munich’s Circus Kronebau in January 1991, and then went on tour with the new Circus Aeros-Olympia, born of the re-privatization of the circuses after the fall of the Communist regime in East Germany. She continued to train new bears, with the help of her first teacher and old friend, Gaston Bosman. In December 1991, she was with Circus Busch-Roland in Berlin, and then spent the 1992 season in Spain, at Circo Mundial.

In the winters of 1994-1995 and 1995-1996, she returned with Circus Aeros, now managed by the former cat trainer, Christine Samel. Meanwhile, she worked at Berlin’s Spreepark and, in 1996, at Hoppegarten—the old winter quarters of the Berliner Circus Union, the RDA State circus organization. Joachim Krebs had become Ursula’s new assistant and companion.

Then Ursula Böttcher signed for two seasons with the new Circus Richter in Hungary, run by the famous family of equestrians and elephant trainers. These would be her last full seasons. She lost her last old bears (Norda, the oldest, was 38!), and her group was reduced to six when she presented it at Cirque Rose-Marie Malter in Anvers, Belgium, in December 1997.

Her final engagement was at Circus Busch-Berlin in 1998. Then the Berliner Circus Union, which owned Ursula’s animals, was dismantled, and to her dismay, her bears were sold to various zoos in Germany. At 71, the brave Ursula finally retired, with her full state pension since she had, from her years of work under the East German regime, the status of a civil servant. Ursula Böttcher passed away in her native city of Dresden, on March 3, 2010, in her eighty-third year.